Kick off fall with Marketing and Branding Month at Inman. We’re going deep on agent branding and best practices for spending with Zillow, realtor.com and more. Top marketing executives drop by to share their newest tactics, too. It’s all you need to take your branding and marketing game to the next level.

The secret sauce to any successful real estate agent is ingenious marketing.

Selling real estate can be a lucrative career, but with the U.S. currently shouldering more agents than homes on the market, standing out and landing clients can seem near impossible.

The reality is, standard marketing strategies, like blasting off generic newsletters and postcards, don’t always cut it.

Oftentimes, to get people to remember their names, real estate agents need to think outside of the box.

Through the Facebook page, Inman Coast to Coast, and over email, Inman reached out to agents across the U.S. and beyond to find out which crazy marketing techniques have actually worked.

A dog, a balloon, and a postcard

Karlton Utter of Howard Hanna Rand Realty began his career in real estate in the early 2000s. He was a salesperson in a new neighborhood and knew he had to come up with something creative to grow his reputation. 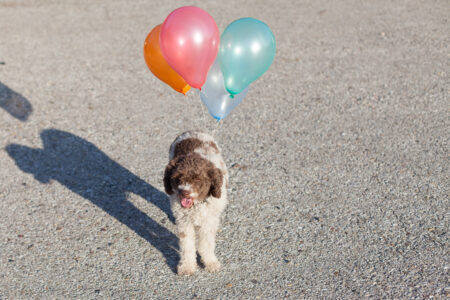 Instead of sending out generic postcards, each month he’d send out customized ones with pictures of himself doing various things in the neighborhood.

One of those months, he tied a balloon to his dog, put on a company T-shirt, and took a picture of them in front of his house.

On the postcard he wrote: “When you see this guy walking down the street, ask him what your home is worth.”

For a long time, he told Inman, he couldn’t even make it around the block without someone stopping him for a value estimate.

“It opened up a lot of conversations and got me known in the neighborhood,” he said.

A needle in a haystack

Jim Lee of RE/MAX Shoreline in New Hampshire wrote to Inman Coast to Coast that all he needed to stand out in his market were some needles and a bunch of cardboard boxes.

“Bought a hundred cardboard boxes in a size that would hold the average softball. Filled them with hay. I then got 100 tapestry needles (no sharp point) a ball of red yard, punched a hole in a business card, and fastened it to the needle and card with the red yarn,” he wrote. “I had a stamp made that I stamped each business card with this: “Finding a good Realtor is often like looking for a needle in a haystack. I stuffed the cards down in the hay and left the needle laying on top, closed the box up, and mailed them to FSBOs and expireds.”

Rob Johnson is a top producing luxury broker for Brown Harris Stevens in Connecticut. He works primarily in Greenwich.

The pandemic has heightened traffic from New York City to Johnson’s market. To enhance the buyer experience, he purchased a customized Mercedes-Benz Sprinter Van for $150,000.

The van seats up to 10 people and is equipped with everything from a bathroom to two TVs. Johnson uses the vehicle to show prospective buyers around the neighborhood, review listings with them, and even draw up offers.

“It allows me to give people a better tour,” he told Inman during a follow-up call. “I can have the MLS on the big screen in the van, we can go through comps, it has WiFi so I can write offers.”

The van also has access to streaming platforms like Netflix and Amazon Prime. If a client comes with their kids, they don’t have to worry about entertaining them.

Johnson got the van about a month ago and is already using it to drive prospective buyers around. He hopes the van will make clients feel more comfortable touring the neighborhood during the pandemic and lead to collaborations with other agents.

Michael Andrew Kelczewski is a broker under Sotheby’s.

In 2019, he leased a private jet to take a luxury client in Philadelphia to a Cubs game in Chicago.

Kelczewski told Inman during a follow-up call that he likes to establish relationships with the people he works with. After finding out his client was a sports fan, he jumped at the opportunity to treat him to a game.

The private jet ended up costing about $8,500 for a round trip. Kelczewski and his client landed in Chicago Saturday night and got home Sunday morning.

“I know it sounds like a lot, but from what we were doing and some of the business components to it, I think it was a justifiable expense,” he told Inman.

Kelczewski went on to not only represent the client as his buyer’s agent, but he also sold the client’s old home. While he wasn’t able to promote his private-jet tactic in 2020 because of the pandemic, he’s confident the idea will intrigue more clients in the future.

Enlisting an artist who painted for Pope Francis

Katie Thurber, a New York-based agent under SERHANT., recently sold a townhouse with the help of renowned artist BERMANO who has painted for Pope Francis, Nelson Mandela, and the Royal Family of Monaco.

The townhouse had been on the market for two years before Thurber took it over in early 2021. The collaboration with BERMANO consisted of hanging his artwork throughout the home and conducting a 20-minute interview highlighting his passion, techniques, and paintings.

“Part of my pitch to the sellers was the fact that I like to do a lot of collaborations with living artists and small businesses that are local,” she told Inman. “I had actually met Joel Bermano, the artist I had collaborated with on this property, at one of my other art events that I was hosting for a development.”

The collaboration gave the townhouse a ton of visibility. In fact, Thurber told Inman that they sold four paintings to people who toured the home.

About a month and a half after the interview launched, Thurber was able to field four offers on the property.

Matt Richling, an agent with RE/MAX in Ottawa, Canada, is constantly thinking of new ways to build his team’s brand. 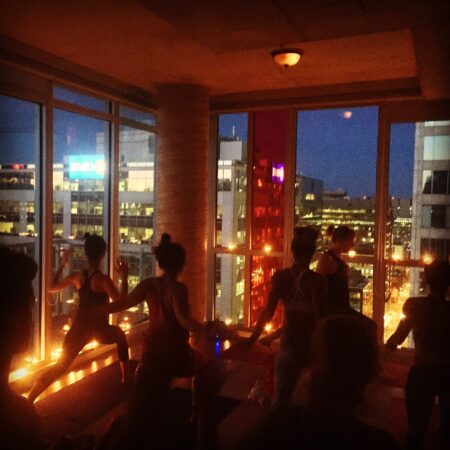 When reflecting on his most memorable techniques, he thought back to 2015 when he hosted a candlelight yoga session in an empty penthouse that was for sale.

“The unit faced all these other buildings so at night there was a stunning view,” Richling explained. “I came up with the idea to do a candlelight yoga season to show how peaceful it was and how good the views were. At the same time, we were also highlighting how much space there was.”

The event was full with about 30 to 40 attendees. Richling told Inman that it was so popular, he had a waitlist.

The event allowed Richling to push the listing without bombarding people with for sale ads. It also gave him community exposure.

“When we can, we always attach a charity component to it. In this case, it was, I believe, collecting a donation or canned food for the food bank,” he said.

Shantee Haynes, a Realtor with Berkshire Hathaway, wrote to Inman Coast to Coast that she uses “coffee prospecting” to market herself.

Haynes spends about 20 to 30 minutes at a coffee shop passing out her business card and paying for coffees. In exchange for the coffee, she asks customers for their contact information.

“Sometimes they may not want to buy/sell, but referrals come your way. I use a prepaid debit loaded with money, and it’s a write off,” she wrote.

Twenty-three years ago, Anna Garifine jumped out of her car at a red light to give out her 100th business card of the day.

Garifine is a Realtor under RE/MAX in New Jersey. She wrote to Inman Coast to Coast that the person she handed her card ended up listing their $949,000 home with her.

“23 years ago Jumped out of a car at 11pm at a red light to hand out my 100th business card for the day before going home to a light pink Mary kay car It’s a wonder they didn’t think I was mugging them 🤣. 2 weeks later they called and listed 949k! She appreciated the hustle,” she wrote.

During the 2016 U.S. election, he decided to ride the event in hopes of getting some sales out of it.

Some celebrities were threatening to leave the U.S. if Trump got elected, he explained to Inman over email. After consulting with his marketing team, Brown created an ad that read: “Hi Snoop and Miley! House it going? If you wanna move to Canada, we can sell you houses!”

The ad got a ton of attention on the internet. And while there was backlash from people who didn’t want Trump to win, Brown told Inman that it brought in clients.

“We received numerous prospects, about a quarter of which we closed deals with,” he wrote.

Lance Owens of the Kona Home Team in Hawaii came up with a low-effort strategy that helped him secure a client.

He wrote to Inman Coast to Coast that the market he works in is filled with second homes and cruise ships. To promote his brand, he would go to boutique stores in his area and drop his business card into business card holders that were for sale.

“I would go by the little trinket stores on Alii Drive and leave my business cards in business card holders (the ones that the lids close) and I picked up a client that way,” he explained.